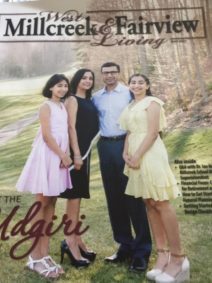 Tanvi Udgiri and family (including Asheen, Class of 2022) were featured in the May edition of the West Millcreek and Fairview Living Magazine.

Harrison participated in the Gannon University Catholic Forensics League on March 2, 2019, for high school speech and debate, placing fourth in original oratory. He qualified for Nationals which will be held in Wisconsin over the Memorial Day holiday weekend.

The band First to Eleven and drummer, Sam Gilman, made it to the Rock & Roll Hall of Fame’s 2019 Tri-C High School Rock Off. The 2019 competition in the High School Rock Off was steep as artists represented 64 schools in Ohio, Pennsylvania, Rhode Island, New Hampshire, Texas and Washington, D.C.

Kellie Mitra attended EDS from Grade 1 through Grade 8. She benefited from a strong math program. Upon graduation, Kellie was awarded the Headmaster’s Award. She attended high school at St. Andrew’s School in Delaware. Kellie graduated from Harvard University with a degree in economics, and later earned her Associateship in the Society of Actuaries.

After starting her career in health care policy in Washington, DC, Kellie moved to Bermuda with her husband where they both worked in the reinsurance industry. After 13 years of island life and with three young children in tow, they moved back to the United States in 2008 and now reside in Chatham, New Jersey.

Kellie has shifted careers to pursue her interest in politics and is now the District Director for New Jersey’s 11th Congressional District.

She loves to ski, something she started at EDS, and she remains an avid tennis player. She still treasures her many friendships from her EDS days.

Julie was in Middle School when her family arrived in Erie, but she benefited greatly from the excellent math and science programs at EDS and was awarded the Headmaster’s Award upon graduation.

After high school at Mercyhurst Prep, Julie attended the University of Pennsylvania and graduated with a degree in economics with a concentration in actuarial science. After interning at Erie Insurance during college, Julie pursued a career as an actuary in the insurance industry and took her first job in the Washington, DC area.

Today, she still lives in the same area of Virginia with her husband, Paul, and two sons and still works in finance. Always an avid equestrian, Julie still enjoys her lifelong passion for horses. This was something that she and her best friend at EDS enjoyed together for many years.

Betsy Beacham Sceiford just wrote a children’s book, Sausage & Biscuit. (Coincidently, her father was Headmaster Richard Beacham.) Mrs. Sceiford earned a bachelor’s degree from Allegheny College and a master’s degree from the University of Wisconsin. She taught Grade 5 for three years and served as a reading specialist for the North East School District for twenty-nine years. Ms. Sceiford also served as a reading consultant for the State Department of Education.